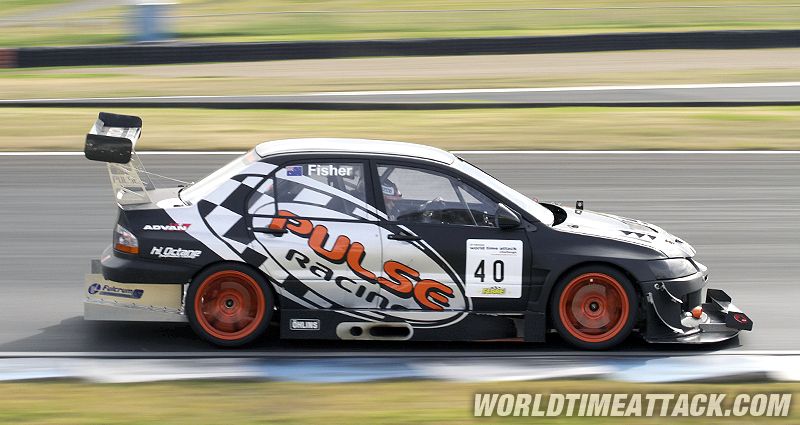 Unfortunately we suffered with a big case of LMR (Last Minute Racing) at this year’s World Time Attack Challenge. The shop has been so busy of late that we left the race cars to all but the last minute, this coupled with almost three ground-up rebuilds of the Pulse Evo, Pulse STI and a customer-spec Evo. Although despite the crazy deadlines the Pulse boys put in MASSIVE – I couldn’t have a better bunch of guys to get us to race day. Thanks again guys -super, super effort ! The shop resembled an episode of American Chopper – all bar the yelling & slamming door stuff.

The Pulse Evo had a complete rebuild from top to toe, the only thing we kept consistent were the engine and drivetrain as we felt these were ‘sorted’ we felt we had enough grunt to get the job done and the dog box was working a treat in previous tests. Basically the rest of the car had a makeover of epic proportions; new body, complete new aero package, new suspension, new wiring and data logging system, new brake/pedal box system, serious metal diet, even larger rims and tyres.

Our first test was the Thursday (day before the event = LMR at its finest) at Eastern Creek. With the new levels of grip we were expecting the possibility of some oil surge problems so we baffled the sh#t out of the stock wet sump to try & combat this – so Thursday’s test had me crossing fingers and toes that this all works as oil surge is not a good thing for engine longevity. So after Steve (Steve Glenney) came back in after the first shakedown we went over the data very heavily. We had a fair amount of surge in both turns 4 and 9 (both right handers) but cool through 1 and 2 (left handers) although the pressure only dropped to 20Psi at these points – not cool but not catastrophic.

Whilst the initial times of the test day were promising we had a fair amount of front-end push in the medium speed corners (140-150kph) we needed to sort out. We were running Khumo 305 tyres for the suspension setup as we only had 2 sets of 295 AO50s for each day of racing which is just as well as we pretty much stuffed the Khumos in four laps. In short we started with the setup we would usually run on an Evo without taking into account the aero and lack of roll/pitch we now have. In my opinion last year we run a road car with a cage, we now have what I call a ‘proper’ race car – so the old settings were so far off its scary. That said the new Ohlins shocks are so bad arse we could sort things out very quickly and easily.

Back to our med-speed push problems – the dual element rear wing we built for the car generates so much down force even at a shallow 5 deg angle (600kg of force @ 300 kph) we were expecting this problem so we built a couple of different sets of front canards and obviously the front wing to combat this. So on went the steep canards and we put a little more front wing into it. Due to a few other small niggling problems we run out of time to test further on the Thursday. So it looked like Friday (the first day of the event) would be another test day – thankfully its a two-day event.

Come Friday morning we made some really good in roads on the front-end push problem. Although as with more grip comes obviously more speed, more G-forces, etc. G-forces being the natural enemy of an already stung out wet oil sump. In short Steve came out of turn 9 with a glaring red oil pressure light and oil warning on the dash. Steve being the gentleman he is killed the engine and rolled it back to the pits for inspection. After pulling the data out of the dash we had to make the hard hard decision to pull out of the event – there was signs of oil surge on almost all corners. At this stage there would only be minor damage to the engine bearings – if we pushed on it would be catastrophic. Especially considering We still didn’t have the sticky AO50s on yet – the Pulse Evos weekend was over.

As it turned out we found we needed more grunt anyway, with the increase in aero load on the car our top speed down the straight dropped from 265 last year to 250 this year. To achieve our goal time of 1:28.00 it looks like the power plant may need to be reworked anyway – oh and a dry sump of course.

It should be noted that the Cyber Evo still runs a stock sump – obviously their internal baffling works better than mine.

All in all it was still a great event.