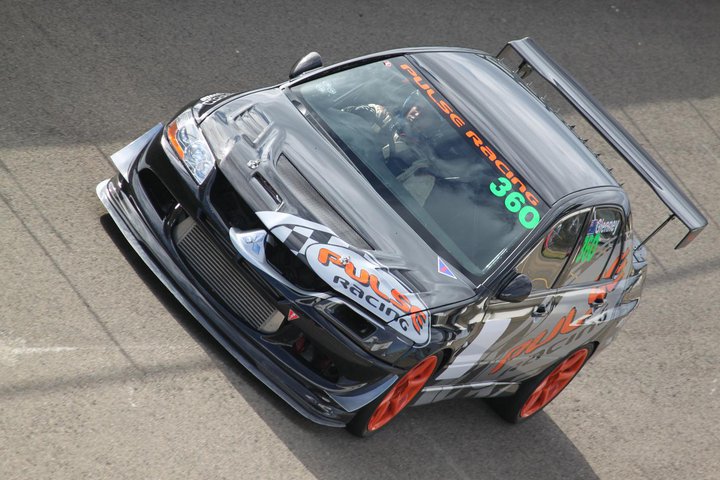 The Evo 8 of Pulse Racing was certainly the talk of the hotly contested Open Class at WTAC 2010 with a winning time of 1.36, that would have seen the car finish well inside the top 10 of the Pro Class.

For 2011 they have their sights set on much higher as thet chase the Pro Class victory, something that they believe is achievable, and they have set to work on the Evo to try and make that goal a reality.

We meet with the Pulse Racing Team Principle and head Engine Tuner Paul Fisher to discuss his plans for World Time Attack .

SUPERLAP AUSTRALIA(SL): Hi Paul, I guess you caught everybody off guard with the sizzling time of 1.36 in the Open Class last year, well over 3 seconds from your closest rival. What are your plans fotr this year?

PULSE RACING(PR): Yes, I guess we did surprise a few people but to be honest we knew that we would be well into the thirties from the testing we had done, but it certainly did everything right on the day that is for sure.

The car in that format was really nothing more than a modified road car and certainly something that would be achievable for a customer based car. This year we will be running a two car team with the Subaru from last year stepping up to chase the Open Class honours and the Evo is now going into the Pro Class and we are serious about winning too. We are not there to be a also-ran!

SL: So firstly lets talk about the Evo. To get the car to something that you think may win the Pro Class you must be making some wholesale changes. Tell us a bit about what you have got going on and what you have planned.

PR: Well firstly we have gone on a big weight reduction campaign; we now have a target weight of approximately 1000kg wet. This is over 250 Kg lighter than what we raced last year. Amongst other things we have gone to a carbon fibre roof and clip on dry carbon rear doors and much thinner lexan windows all around. Then we will increase the horsepower from under 700 to closer to 780.

SL: Wow, that will equate to a fair increase in power to weight ratio! So is that all that you think that you will need to give the Cyber Evo a serious Australian challenger this year?

PR: Absolutely not! There is an awful lot more to it than that. To start with we were running a standard centre diff last year so obviously that will change, which is worth quite a bit around a race track as the power is increased. Also we will be replacing the old street spec shock absorbers with some proper Swedish made Ohlins Coil Overs. These shocks are seriously expensive but at the level we are now racing at itis what we feel we need. We are also remaking the entire cross members front & back, to give the correct suspension geometry and lose some more weight, widening the track and adding wider wheels. Oh, and a new PPG dogbox will be going in as well.

SL: So you certainly are not messing around. The Time Attack Bug has definitely bitten hard around here. Anything else you are doing you can tell us about?

PR: Yes you could say that Ian, but that is what we do! Apart from wanting to show the world that we can build a car in Australia as good as anyone else, it is also a showcase of what our company can do and what we can do for our customers. If someone has the money we could build a car like this for a customer. There is no real secret to it but something this involved is certainly not a cheap exercise, thats for sure.

SL: You certainly have moved this into the Pro Class Category with a build like this. One thing that many believe was the key secret behind the Cyber Evo’s blinding pace was the aero, what will you be doing in regards to this?

PR: I was waiting for you to ask that! Yes we are well aware of the need for aero that works and we have a guy helping us with that. he was infact an ex F1 Engineer and has come up with quite unorthadox designs that he assures me will work. One of the big changes, apart from the huge new rear wing is the crazy front wing that will be mounted down near the splitter. Again I’m not an expert here so I have contracted someone I believe who is. If it works as good as we are told it will, we should almost be on rails!

SL: An “f-wing”, that’s awesome! Thats what they call it on Chris Rados car and that is in fact the only car i have ever seen using this technology. You will certainly be the first in Australia. And Steve Glenney will be driving it once again?

PR: Yes, Steve will be driving both this car and the Subaru in Open Class. He is now an integral part of our program. Not only is he probably the best driver you will ever get, but he is also extremely good at relaying data, which from an engineering perspective is very important to us.

SL: Ok, tell us what is happening with the WRX?

PR: Well the WRX is actually a customers car and this year our plan is for this car to put us at the top step of the podium in Open Class. This car is really out there to show what we can do for our customers! The modifications on this car are whilst not cheap, they are certainly attainable by the average person with a reasonable budget. We will be losing 150Kg, fitting a new tein Suspension and a dry sump kit to the 2.7 Litre flat four with a target power figure of about 750Hp and the goal of being deep into the thirties at Eastern Creek. In fact we would like to do with this what we did with the Evo, a 1.36 but only time will tell!

SL: Thanks Paul and good luck with everything, we will keep the fans up to date as things progress.