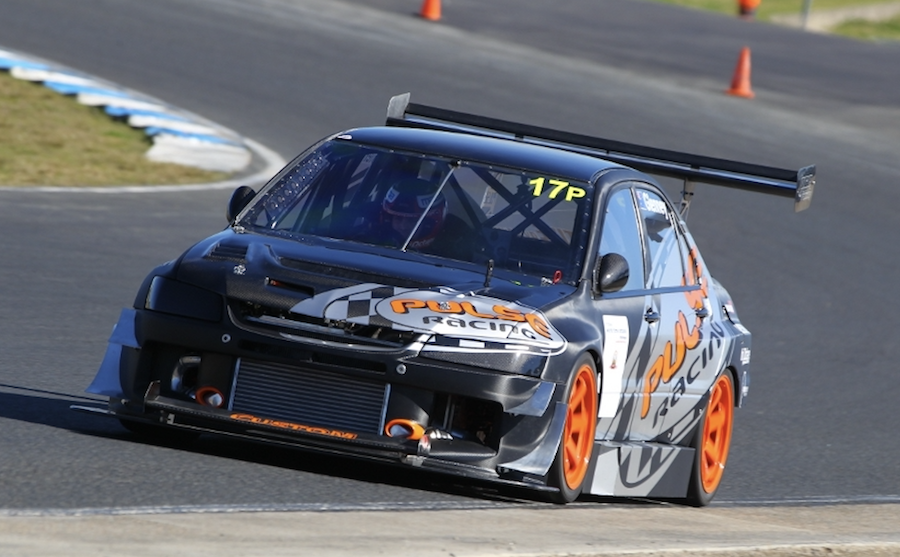 As the 2012 World Time Attack Challenge draws near, there is an air of excitement in the Pulse Racing workshop! The Pulse Evo has seen some rigorous testing at Wakefield Raceway and Sydney Motorsport Park at the capable hands of Steve Glenney and the finial adjustments are now being made.

At the eve of WTAC 2012 though, we can’t help but think of the years of development have gone into the Pulse Evo. It’s almost amusing to think it started out as a street car in back in 2007 with only 140kW at the wheels!

It wasn’t long before the modifications started – intercooler, exhaust system, fuel pump and lots of tuning saw substantial power increases but this only highlighted to limitations of the factory suspension!

A package of coil-overs, swaybars and more were soon fitted but Paul just could not be satisfied with the power so a set of cams and a turbo upgrade helped satisfy him… for a while! Some track time was all that was needed for the racing bug to bite!

Superlap 2009 gave us the perfect forum for demonstrating the capabilities of the Pulse Evo’s performance and Paul dominated the Club Sprint Class – taking First Place and inspiring us to develop the car even more!

An executive decision was made: the car could not reach its full potential as a street car so it was gutted, fitted with a roll cage and the motor was built for some serious power, but would it be enough?

Superlap evolved into the World Time Attach Challenge in 2010 and we could not resist. The Pulse Evo arrived with its new graphics, loads of carbon fibre and aero additions and with professional racing driver Steve Glenney at the wheel. We stunned the competition again snatching 1st Place in the Open Class Division

Our campaign for the title 2011 WTAC saw a complete rebuild of the Pulse Evo from top to toe – the engine had enough grunt to get the job done and the dog box was working a treat… but the rest of the car had a makeover of epic proportions, new body, complete new aero package, new suspension, new wiring and data logging system, new brake/pedal box system, serious weight loss diet and even larger rims and tyres.

Our first day of testing saw astounding levels of grip and we were expecting the possibility of some oil surge problems so the factory sump has heavily baffled to combat this. Further aero development was made and we were ready to go.

The first laps on race day realised our worst fears – the huge amount of grip raised cornering g-forces to the point where oil surge could not be avoided and we reluctantly retired from the event. Not to be dismayed, this has only driven the development of the Pulse Evo even further!

Paul and the team have had a busy year in the Pulse Workshop adding a dry sump to the Evo as well as a huge list of modifications, which includes a larger turbo, gear ratio changes, Motec engine and chassis data logging units and a revised engine package. Stay tuned for the results as Pulse Racing takes on the world!